From all the available Revision Control Systems I know, Git is my personal favorite. I use it for all my revision control needs at work and at home. As a consequence, I got quite a few git repositories residing in my home directory. To keep track of all these repositories, I modified my bash prompt in a way that it displays the most important git infos in the current directory (of course only if the directory is a git repo). My solution basically consists of two parts. First, I wrote a simple Perl script, that summarizes and colors the output of git status -s. Second, I created a bash script that is sourced at the end of the ~/.bashrc. This bash script overwrites the standard cd command and checks whether the new directory is a git repository. If the check doesn't fail, the output of the Perl script is integrated in the prompt.

In a first version, the bash prompt was completely refreshed after every command executed in the shell. For very large git repositories, however, this led to a noticeable lag after every command. So, I decided to rerun the git status script only if the last command executed in the shell was likely to modify the status of the git repo. My list of commands, that makes no claim to be complete, includes vim, cp, mv, and, of course, git. To manually rerun the status script, and, thus, update the prompt, I included the command g, that actually only triggers the git status script. As a drawback of this solution, changes made in the same git repo are not visible across multiple concurrent shell sessions. For my needs, however, it works well enough. See the following screenshot for a short demonstration: 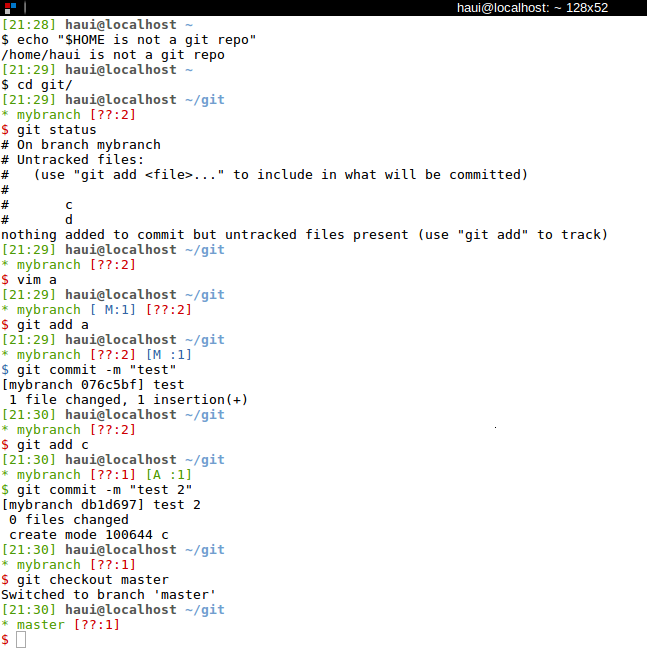 Please note that my prompt spans across two lines by default (over three when inside a git directory).

You can download the two scripts here. Move gitstatus into ~/bin/ and make it executable. Drop gitstatus.sh in your home directory as .gitstatus and add the following line to your .bashrc

You may of course modify the GITPREFIX and GITSUFFIX variables in gitstatus.sh to fit your needs.